Think about an MS Word software or any document editor software that allows you to type but not to modify, delete, edit... etc. How would that be? Useless, right? Same is true for a decision tree software. You need to edit a tree in any way you want. You want to cut/copy/paste between nodes, copy a subtree and replace a node with that copied tree, insert decision/chance nodes between 2 connected nodes, etc. Yes, everything is possible with this Decision Tree Software and Analyzer software.

The Decision Tree Software software supports the following manipulations on the decision tree.

Now, you want to rearrange the vertical position of the options. Simply drag a node and move up or down.

Once you leave the mouse, you will see the tree is rearranged.

Select a Chance node, and right-click to open the context menu. You will notice the option "Convert to Decision Node".

If you select that menu, you will see the chance node is converted to a decision node.

You can select a node and from the context menu (or using keyboard CTRL+C) you can Copy a node. For example, notice the following tree.

We will select the Chance node and Copy from the context menu. 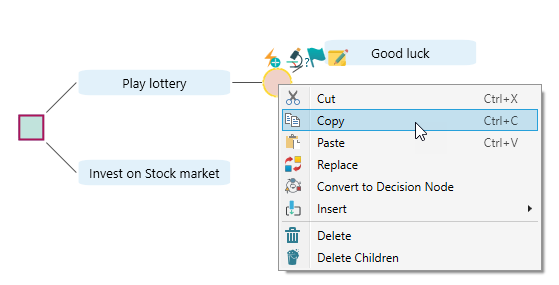 Now, select the option node "Invest in the stock market" and paste.

Same like, Copy and Paste, you can cut a node or subtree and paste over another node.

Replace a Node with copied node or subtree.

You can copy a node and replace a node with the copied node (along with its subtree). Consider the following tree.

Say, you want to replace the node B with the node A. Simply copy the node A and select node B, then from the context menu, choose 'Replace'.

You can even replace the root node using a copied node. For example, say you copied one of the decision nodes that have children "Buy a plane" and "Invest in business". Now select the root node and replace.

Once the "Replace" menu is clicked, the tree becomes like this:

Delete a node or Delete Children

From the context menu of any node, you can find the delete option. You can use the Delete Key of your keyboard to delete a selected node too. When you select a node and if that node has children, you can simply delete its children from a context menu option "Delete Children".

Once this option is chosen, the tree becomes:

It won't be a fun if you could not insert a node between 2 nodes. Once you formed a decision tree and realized that, there was another decision needed to be taken before some action, or you just realized a new uncertainty between 2 sequential decisions, you need to insert a new decision node, or a chance node or a simultaneous node. Right? You can use the Insert feature from the context menu to solve this problem.

You can insert a node by selecting the decision node too, as shown below: